Tooth loss due to loosening is an ailment that occurs frequently and usually develops slowly. Until the advanced stage it is accompanied only by a few symptoms which do not seem threatening, e.g. bleeding of the gums.

This is called periodontitis (also referred to as periodontosis by the media). Such diseases of the tissues supporting the teeth can sometimes be observed from the age of 16, but are more common from the age of 30. Early recognition and treatment are particularly important.

To prevent the disease developing further, the first step is to remove bacterial plaque and tartar from the depths of the gum pockets. These serve as a breeding ground for the bacteria which cause the disease. We use the latest scientifically acknowledged methods (hypersonic instruments) to remove diseased tissue particularly gently and painlessly and thus minimise gum pockets. Where it seems appropriate, we can also undertake a microbiological examination of the gum pocket. An attempt can then be made to augment the lost bone. This requires specialised knowledge and techniques. Patient clientele: predominantly adults.

If you cannot find a parking space outside our practice, please drive to the multi-storey car park in Gartenstrasse 2, about 100m away. We will pay part of any parking charges. Please ask at reception.

Business-appointments:
Early morning, late evening or
at the weekend by arrangement 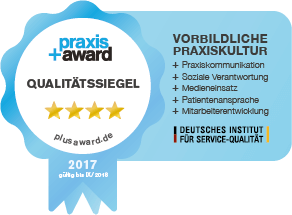